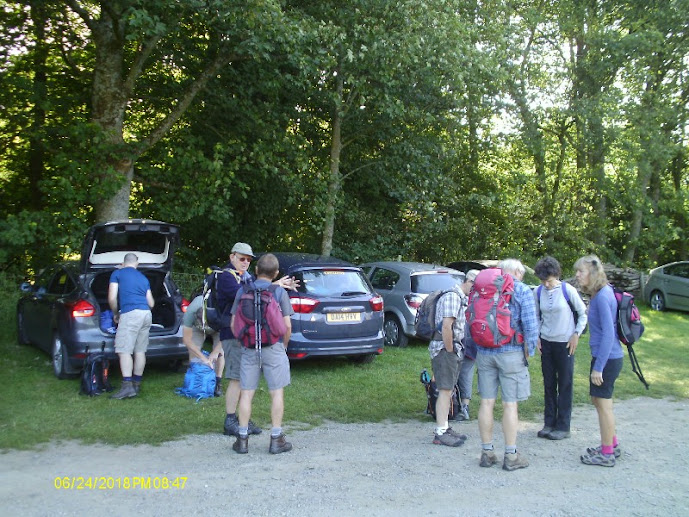 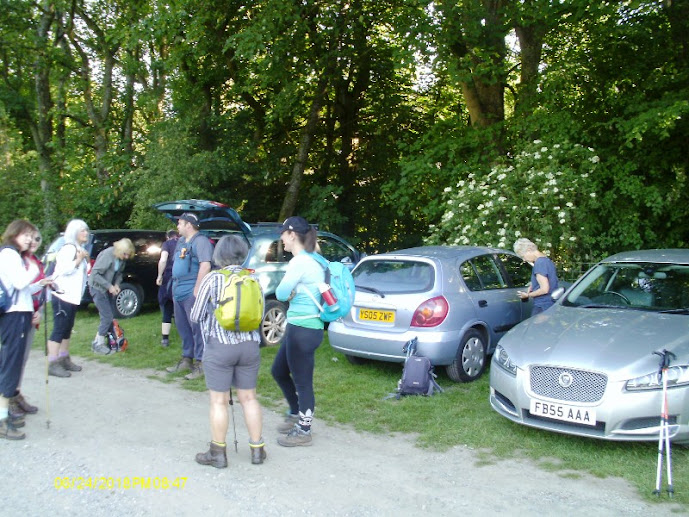 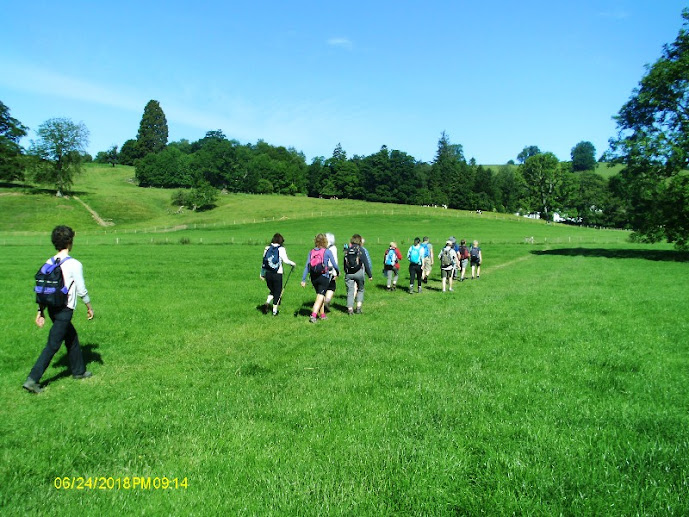 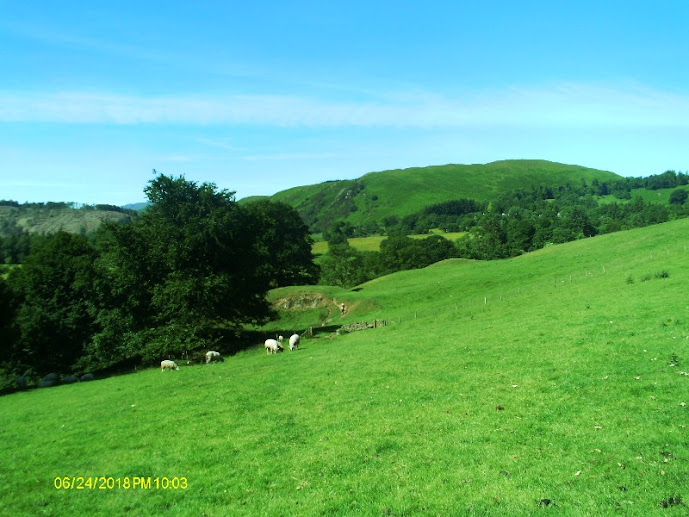 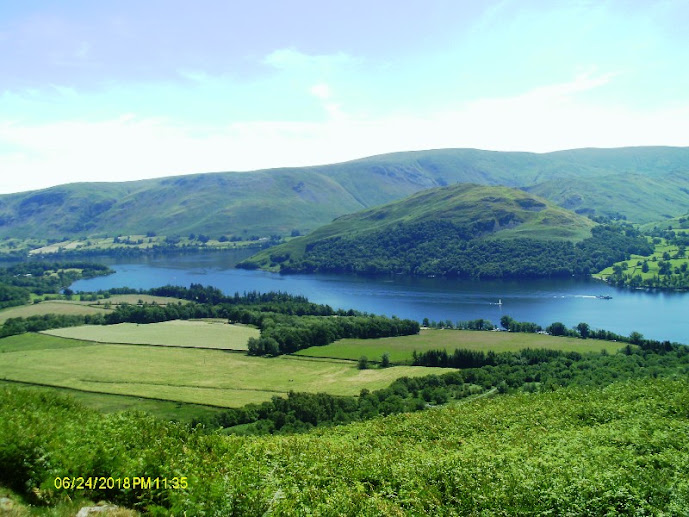 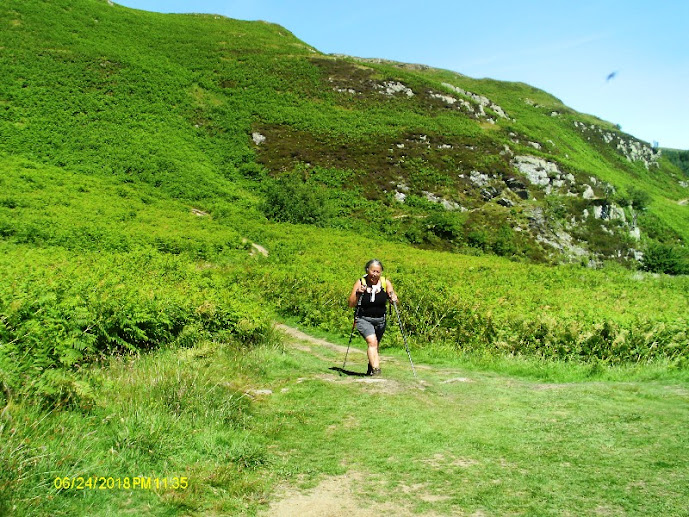 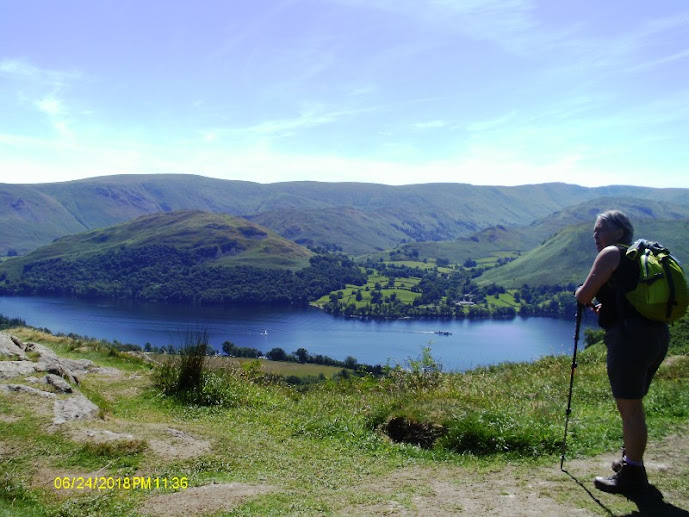 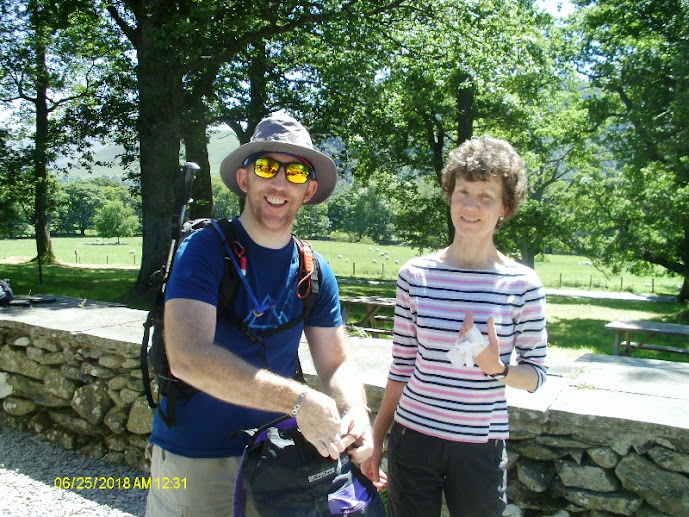 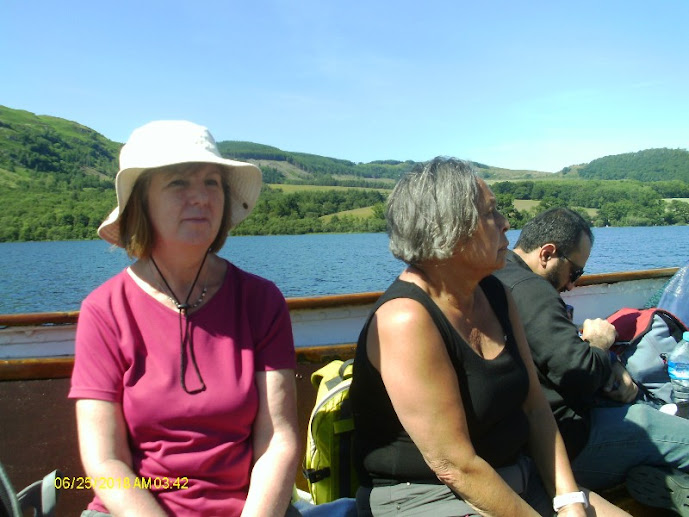 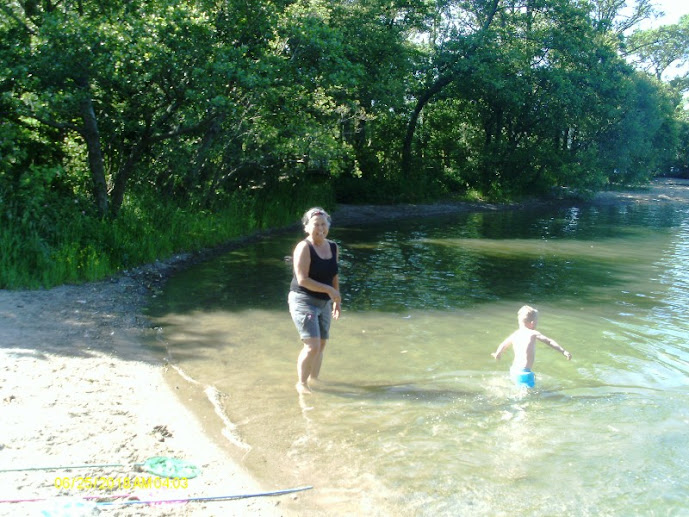 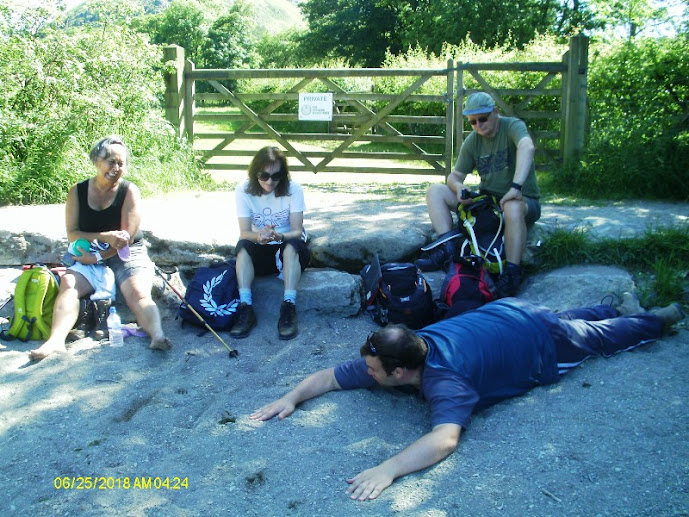 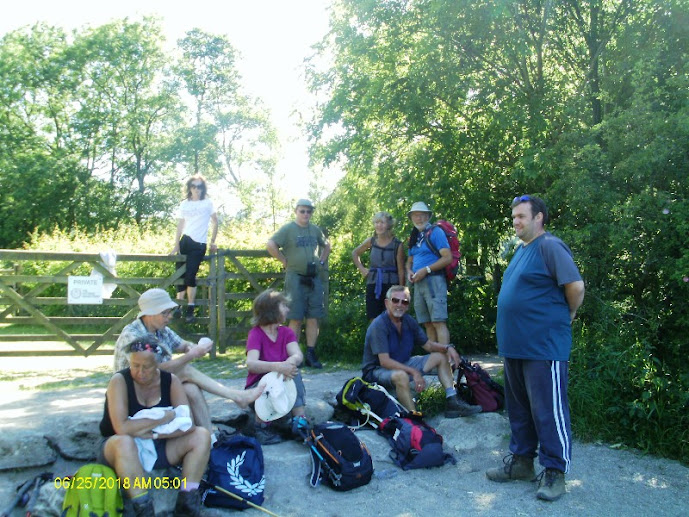 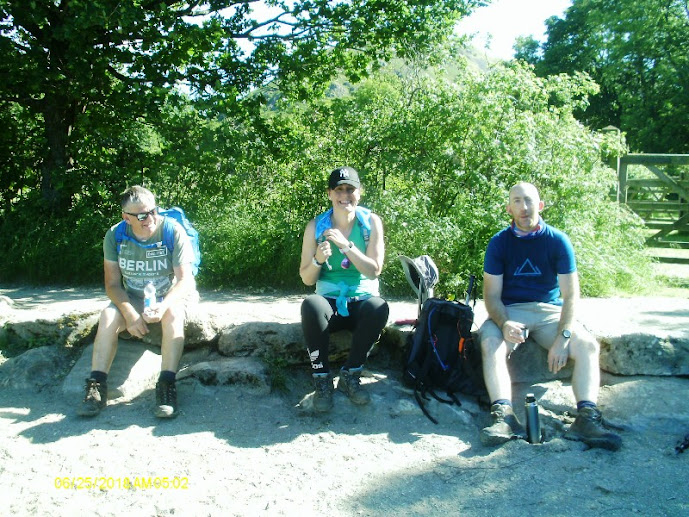 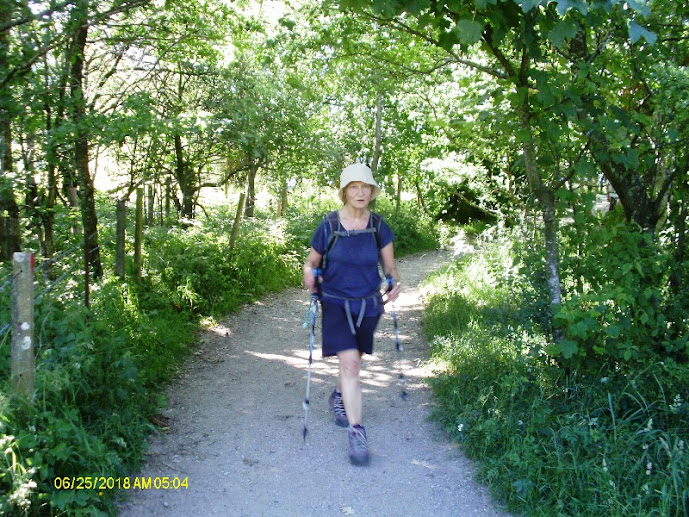 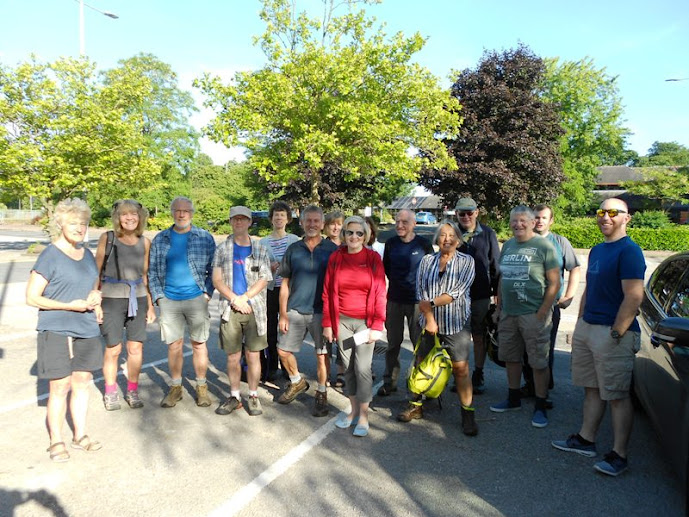 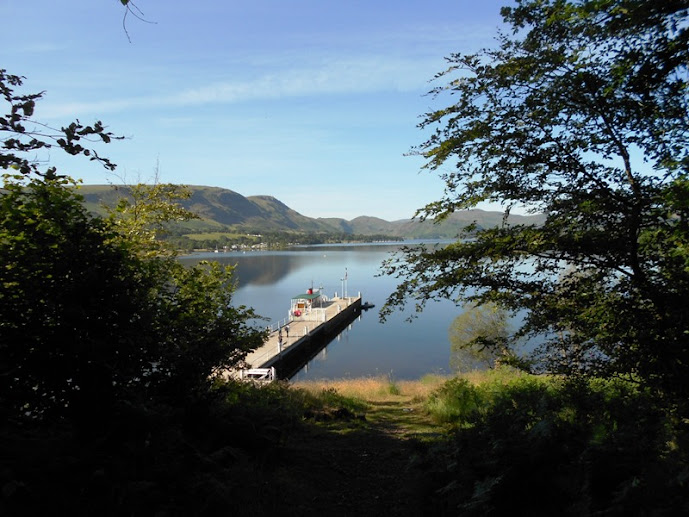 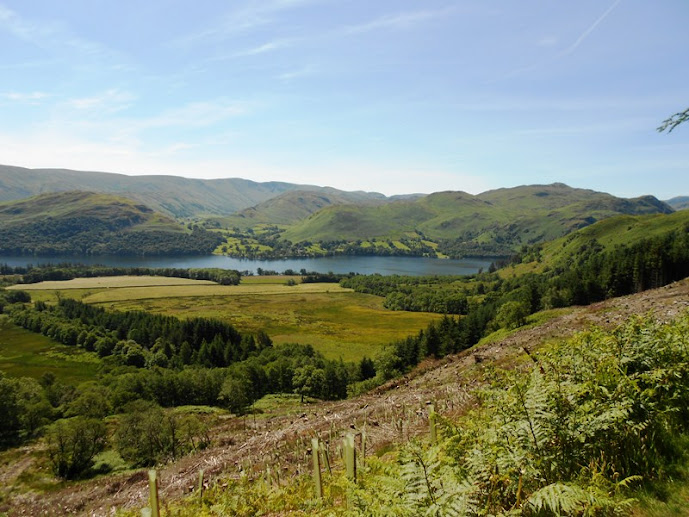 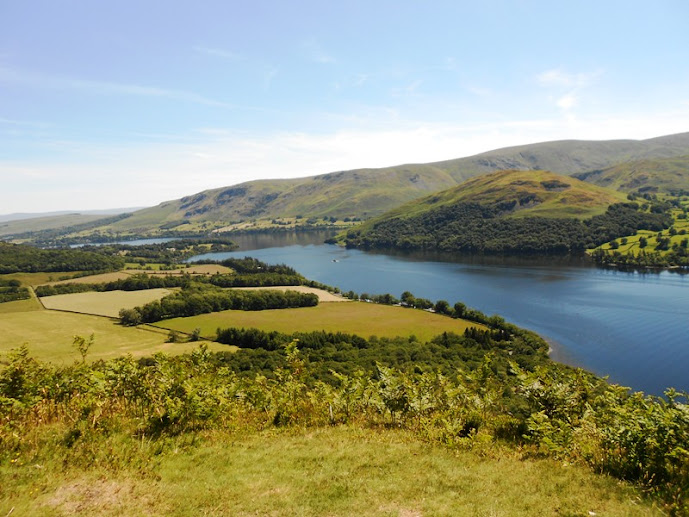 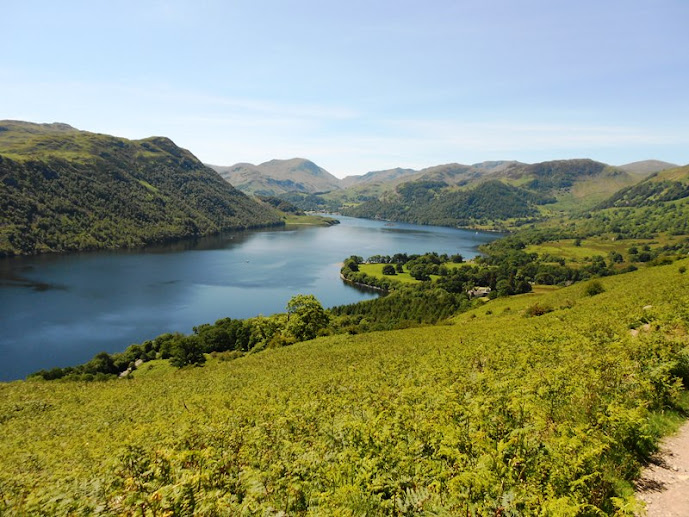 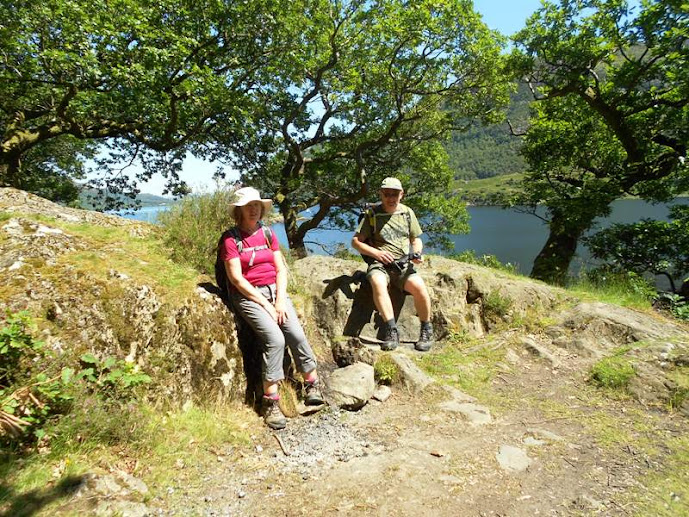 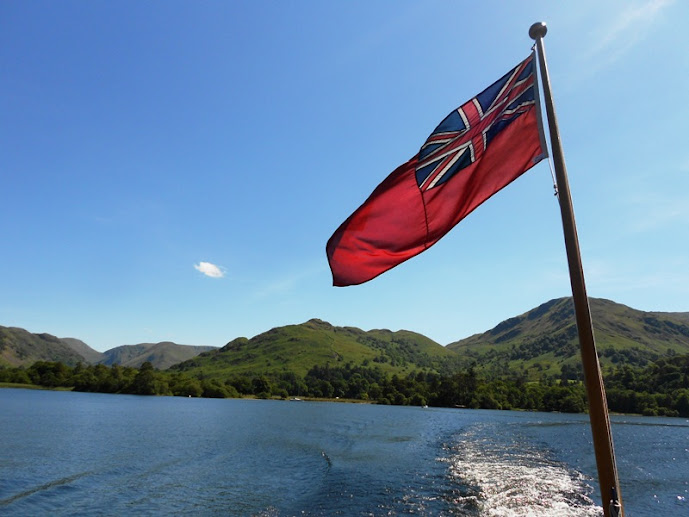 We did it!! Eight members plus one guest walked twenty-one miles, all round Ullswater on a beautiful hot Summer’s day.  Nineteen turned up at The Sands and it seemed like a logistical nightmare both there and at Pooley Bridge car park; I’m not sure anyone knew how many I was meant to count, some of whom might walk more slowly, or get the ferry from Glenridding, or stay for the meal afterwards in Tirril.

A warm welcome to Carol, Breda, Kelly, Linda and Brenda.  We assured them that this was not a normal walk with a definite A and a definite B and we usually did have time for lunch….Heather’s sister, Cherryll, also joined us; she’s more used to cycling long distances than walking but she did it!

John led three who definitely did not want to walk the relentless pace set by the others.  We were walking at 09.00 on the dot and those of us who finished were back at the cars at 18.45.  Very fast from Pooley Bridge to the path split at the Shooting Lodge, then Ian led twelve round the front of Gowbarrow and four of us went up and over Gowbarrow; the first time ever that Gowbarrow wasn’t suffering gale-force winds.

At Aira café, the round-the-front-of Gowbarrow-team were there first and some people had lunch and some didn’t and it was all very loose and very pleasant and difficult to leave but finally the voice of authority, Ian, suggested that it would be useful for those wanting to go all round to heed the march of time and show some action.  At Glenridding three decided to take the ferry, three decided to head for Patterdale and have their lunch that they hadn’t had so that left nine (no, don’t even try to work it out…) who walked to Patterdale and thankfully – as the over-the-top-of Gowbarrow-four hadn’t drawn breath yet – the leader took an executive decision to have five minutes at Side Farm for ice lollies and refill water.  Thank you to Side Farm for that!

We eased off the pace a little and started the uppy-downy gorgeous path to Howtown, scenery beyond beautiful, lake the deepest blue.  Refilled water at Lowther tearoom.  The highlight was a river where we doused arms, faces, heads, necks in cool, sparkling water, oh boy, did we need that as the heat was pretty fierce.  We finally arrived at Howtown at 17.00 to find six others who’d taken the ferry there ready to join us for the last four miles to PB. They had had quite a wait…. The last four miles is very lovely, grassy paths, by the lakeshore and we used the campsite taps to refill yet again….

No-one moaned (apart from me probably) about burning feet, blisters etc but to say that taking boots off at PB was a relief is an understatement.

Nine of us had a great meal at The Queen’s Head Tirril although the effort required to get limbs out of the cars should have been on film.  A big thank you to Ian for helping with leading and to John for sorting out logistics.  If you took part and haven’t yet made a donation for Air Ambulance, please get your contribution to John ASAP

or go to the Just Giving page.

I hope everyone is fighting fit today and thank you for coming and well done!!

A fantastic effort from all those that took part

£360 was raised for The North Air Ambulance

A local company has offered to match whatever is raised by the members.

So come on members, lets's increase that total.

The Fund has now closed

This will be matched by Lee Watson, Managing Director of

Giving a total of 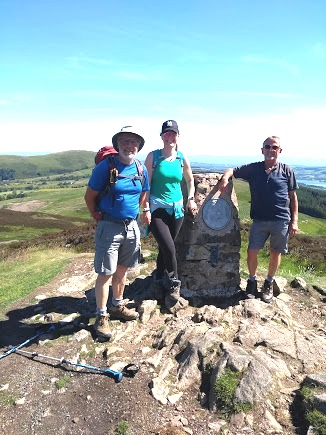 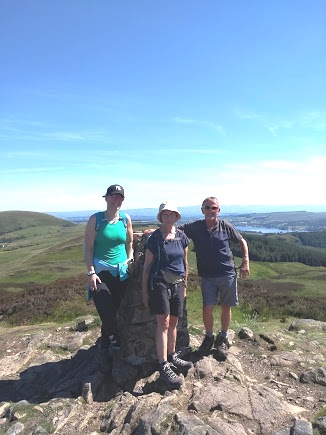 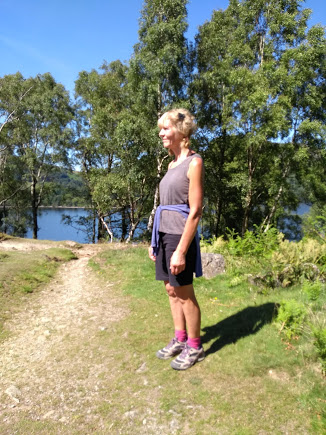 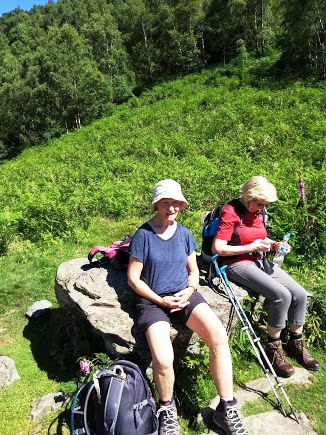